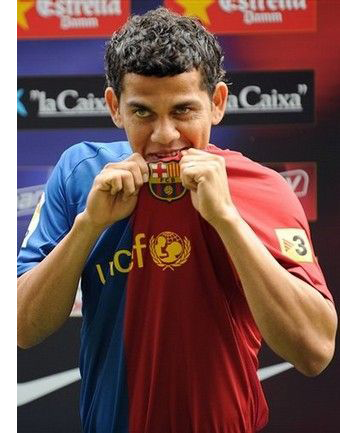 Dani Alves is one of the strongest, most intense right-sided players in the world, and covers an extraordinary amount of ground. He came to FC Barcelona in the summer of 2008, aged 25 years, after six seasons with Sevilla. Born on May 6, 1983 in Juazeiro (the Brazilian state of Bahia), Daniel Alves started out playing at youth level for the biggest club in the region, Esporte Clube Bahia. He progressed through the ranks, and was just 18 when he played his first game in the Brazilian Serie A, under management at the time of former Barça man Evaristo de Macedo.

Despite being just 172 cm tall and weighing only 70 kg, Alves is a very strong player. He covers a lot of ground, being a tireless runner able to move up and down the wing – contributing regularly to the attack, without ever neglecting his defensive duties.

It is going forward where he most impresses, and he can shoot with both his left and his right foot. He is also a free kick specialist, and is highly renowned for his crossing ability.

Bahia beat Paraná 3-0 that day, and Alves impressed from the outset. He was brought down for a penalty and also supplied an assist, leading the home fans to start chanting “Ah, ah, ah, Daniel titular”.

Alves’ first professional title was the Bahia Championship in 2001 followed by the Northeast Cup in 2001 and 2002. This led to a call-up for the Brazilian Under 20 team in January 2003. Sevilla had their eye on him, and brought him to Europe on loan.

Pleased with his performances, the Andalusian outfit soon acquired permanent rights to the player. In late 2003, Alves was in the Brazilian U20 team that won the World Cup in the UAE, beating Spain and Andrés Iniesta 1-0 in the final. Alves was named best full back in the competition.

That same 2003/04 season, Alves played 29 times at right back for Sevilla, helping his season to win a European berth.

As time went by, Alves consolidated his role as both a defender and part of the attack in the Sevilla team that in 2005/06 won the UEFA Cup. The Brazilian was named best player in that competition, and a few months later, won the Super Cup as his side beat FC Barcelona in Monaco.


In 2006/07, the Brazilian formed an essential part of the Sevilla team that 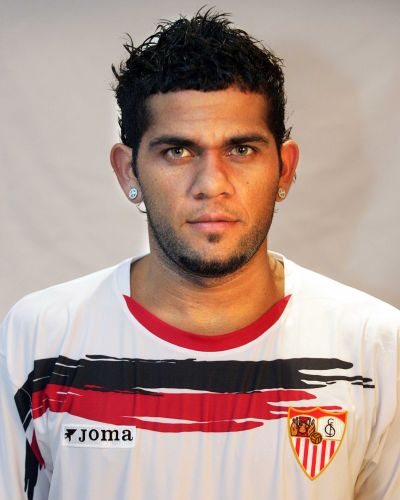 went on to also retain the UEFA Cup, win the European Supercup and also
collect the Copa del Rey.

A year before joining Barça, Alves won the Spanish Super Cup by beating Madrid and also gained his first Champions League experience. Sevilla
went out in the second round to Turkish club Fenerbahçe. In that 2007/08 season, Alves played 33 league games and was the second most used player
in the squad after Navas.

Now considered one of the best full backs in the world, Alves came to Barça in the summer of 2008. In his first season, he was involved in the incredible treble winning campaign. He missed very few games, but one of those was the Champions League final in Rome. By now he was fully consolidated as one of the finest examples the tradition of Brazilian wing backs, contributing five goals in his 54 appearances for his club that year. 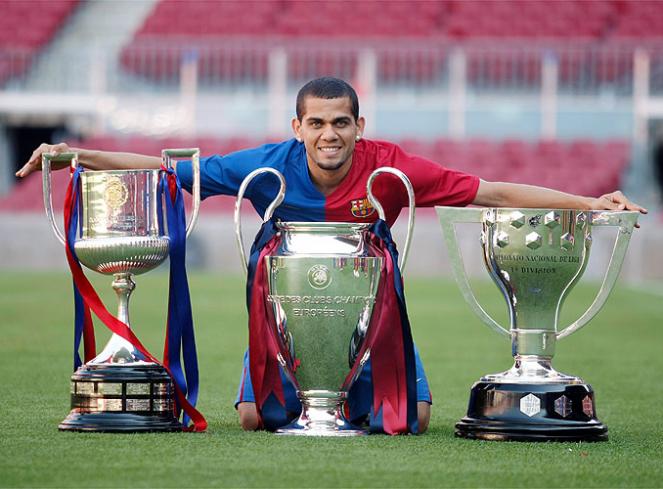 Despite injury problems he was the first choice right back in his second season, winning his second consecutive league title among other honours. He scored 3 goals in 29 matches and for the second year running was included in the UEFA team of the year.

In his third year at Barça, he won three new titles, the Spanish Supercup, La Liga and the Champions League. And unlike in Rome, this time he did appear at the Wembley final in a year that he also signed an extension to his contract until 2015.

In his fourth year at FCB, he won the European Supercup, the Spanish Supercup and the Copa del Rey, scoring three goals in the six competitions that Barça competed in, and making 52 appearances.

In 2012/13, with Tito Vilanova as manager, he spent much of the early part of the season out through injury but came back to play a big role in the 100-point Liga victory, playing 30 games in the competition. 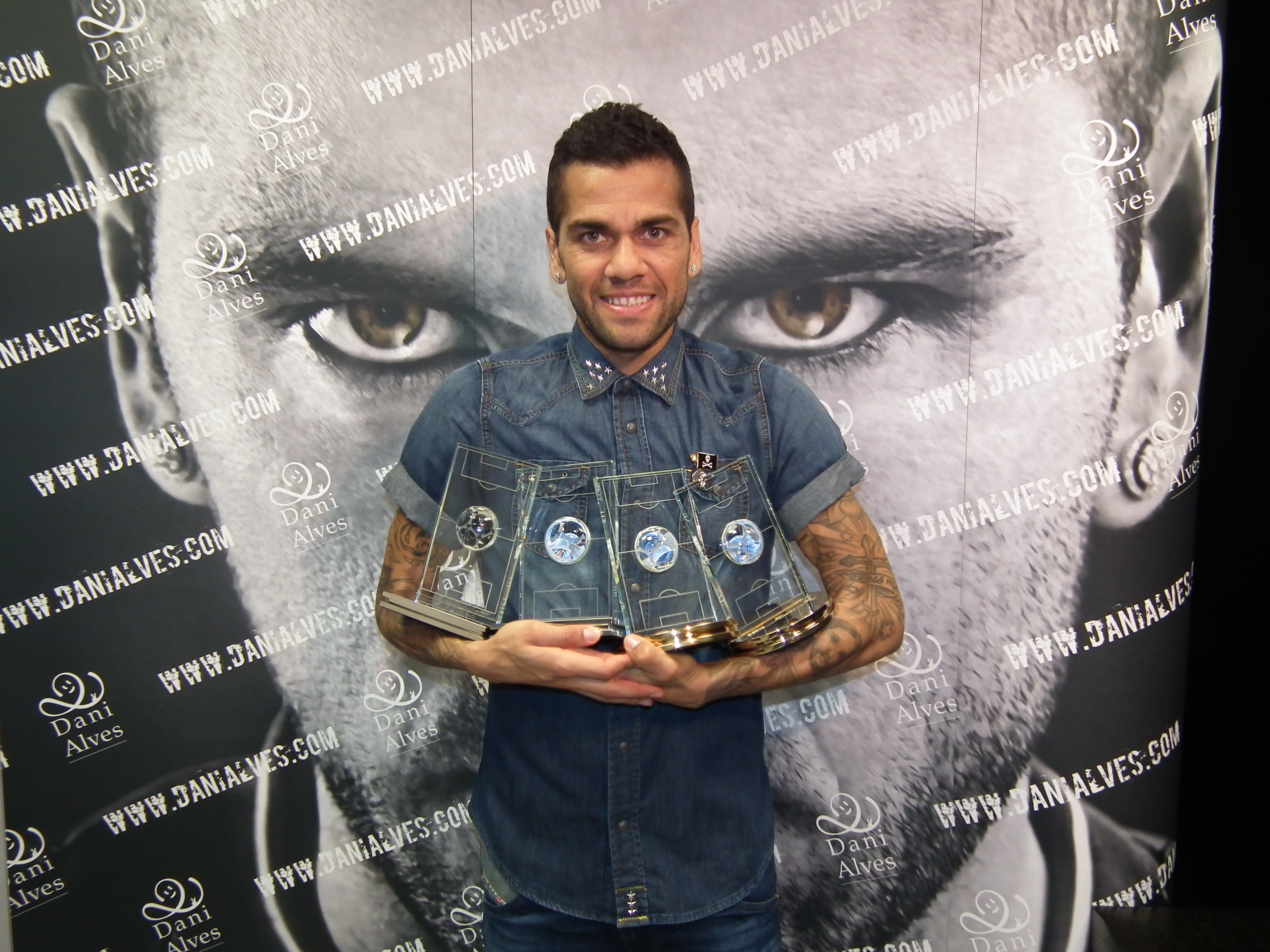 In 2013/14, he played 42 matches, 27 in the league, 5 in the Copa del Rey and 8 in the Champions League, as well as the two games in the Spanish Super Cup victory over Atlético Madrid. He scored four goals that season and in April 2014 became the foreigner with the second highest number of appearances for Barça (293) topped only by Leo Messi, who had 421 at the time.

In his seventh season at Barça, Dani Alves continued to play a vital role under Luis Enrique, playing 29 league games plus 11 in the Champions League and 8 in the Copa del Rey. On June 9, he won the Champions League for the third time and shortly after signed a two-year extension to his contract with the option to one more. 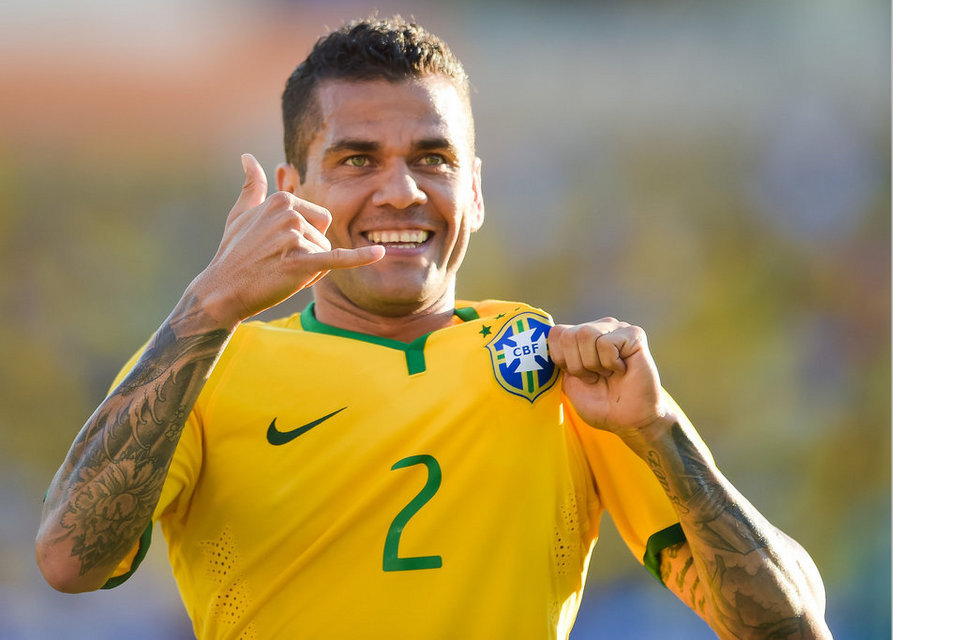 Alves has also been a regular feature in the Brazilian national team since 2006/07. In the summer of 2007, the right back won the Copa America and in 2009 collected a Confederations Cup winners medal. His first World Cup was that played in South Africa in 2010, in which Brazil were knocked out at the quarter final stage by Holland, and he was also in the squad when Brazil was the venue for both the Confederations Cup, wihich his country was in 2013, and the World Cup itself in 2014, where Brazil went out to Germany in the semi-finals. Daniel Alves made his official debut for the Club on 31 August 2008 in La Liga against Numancia. The match ended with a Barça's defeat (1-0).

On the afternoon of June 27, 2016, the Brazilian right back closed 8 consecutive seasons with FC Barcelona and signed an agreement linking him with Juventus until June 30, 2018. 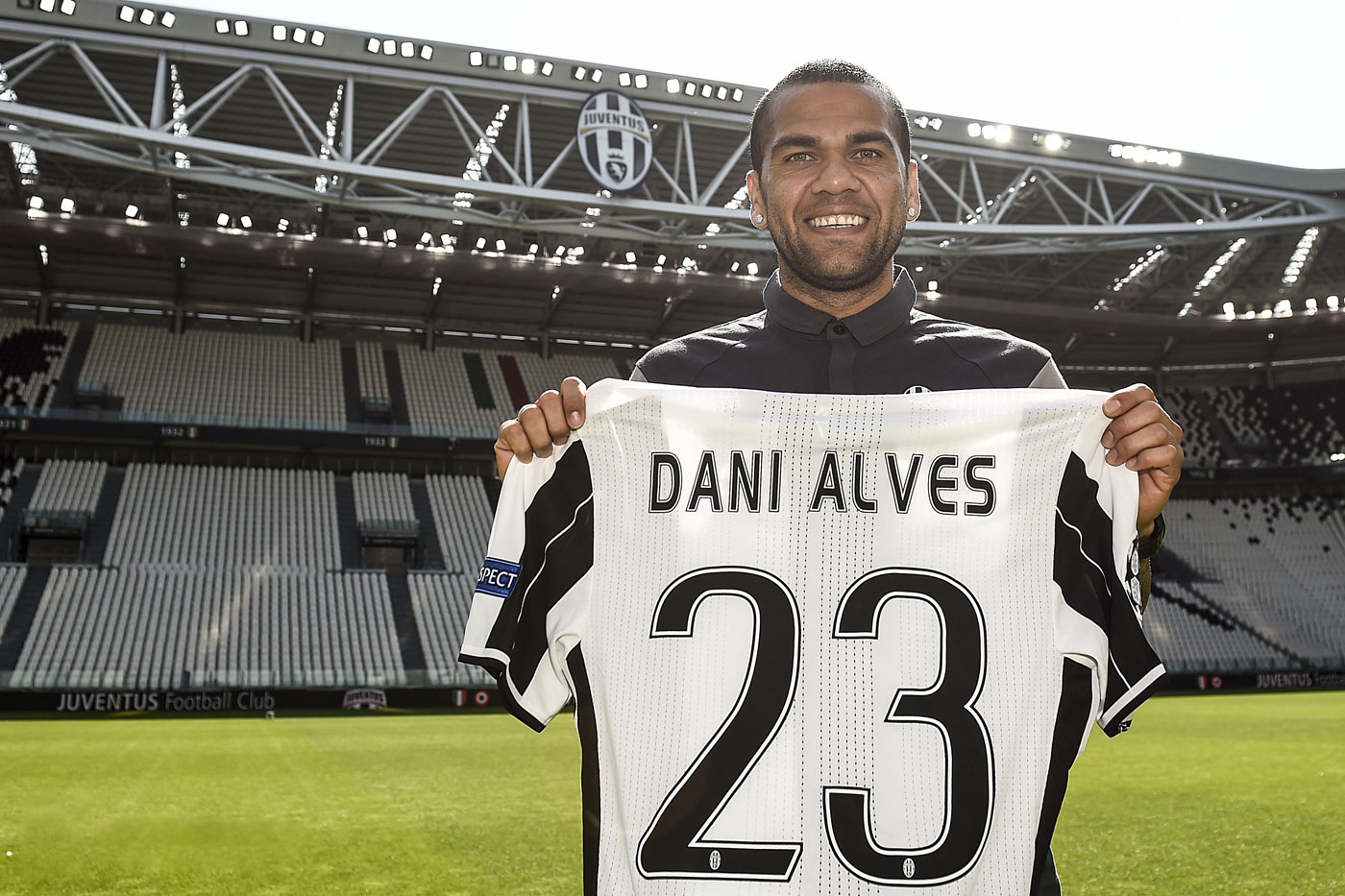 After a whole season with the “Bianconero” squad, where he was able to conquer the Seria A and Copa di Italia titles, Dani Alves leaves the Italian land behind towards french territories, in order to, as he says himself: “Be champion”

On Wednesday, July 12th 2017, at 16h, the Brazilian international was introduced as the newest right back for PSG. 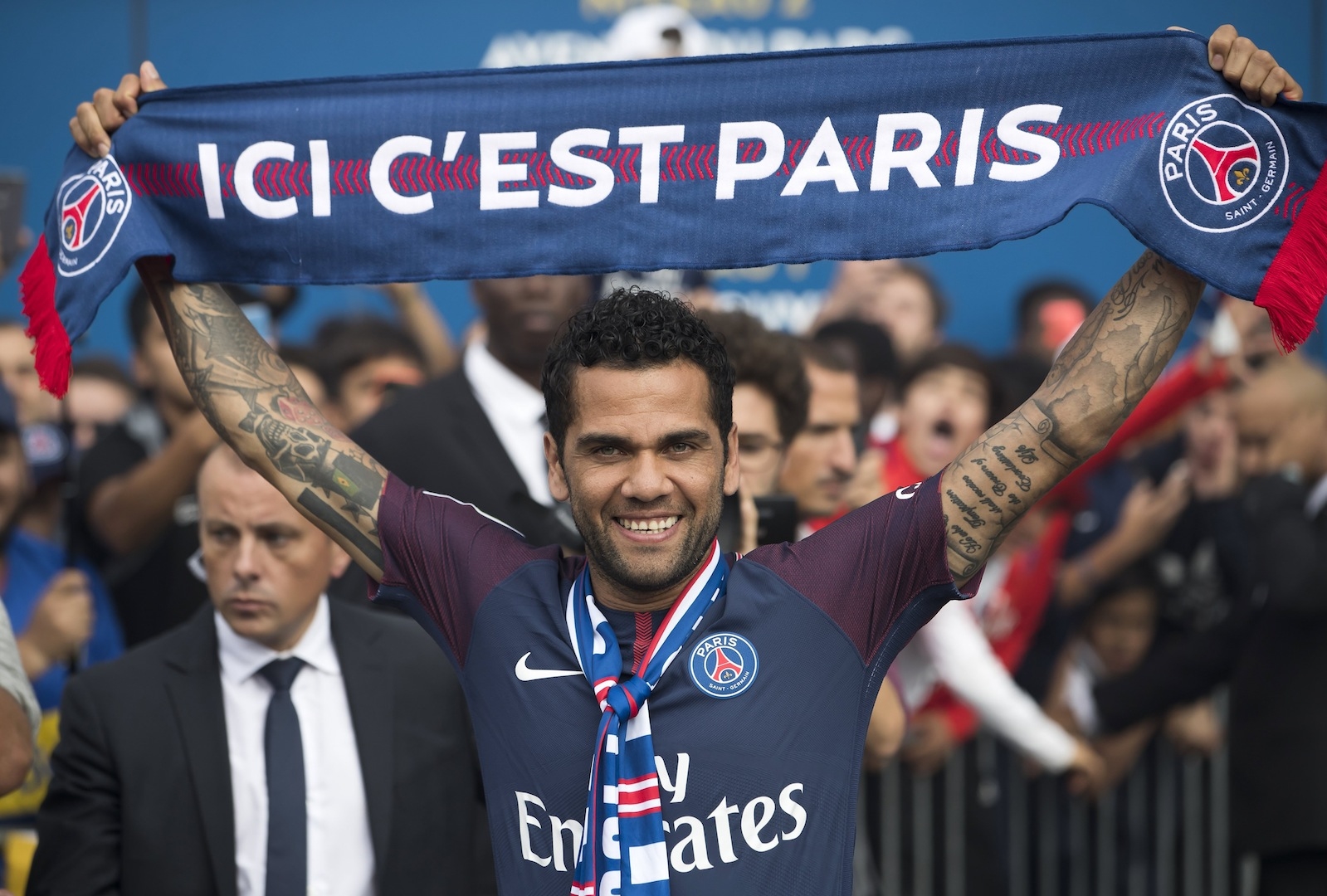